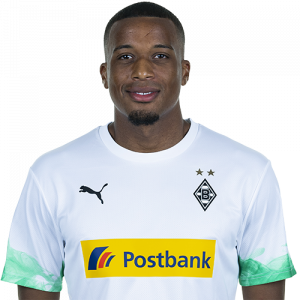 Alassane Alexandre Pléa (born 10 March 1993) is a French professional footballer who plays as a striker or winger for Borussia Mönchengladbach and the France national team.

Pléa made his senior debut for Lyon on 7 October 2012 in an away Ligue 1 match against Lorient, coming on as a substitute for Bafétimbi Gomis in the 90th minute; the match ended in a 1–1 draw.

Nice
Pléa left Lyon and joined Nice in the summer of 2014 in search of more game time in a deal worth £450,000. Under his first manager at Nice, Claude Puel, he was moved into the middle of the park and began to flourish first under Puel and then even more so under his successor Lucien Favre.

On 20 October 2016, Pléa scored the only goal in the 1–0 away victory against Red Bull Salzburg in the 2016–17 UEFA Europa League Group I match. That was Nice’s first-ever UEFA club competition away win, having previously gone 15 UEFA club competition away matches without a win. 3 days later, he scored a hat-trick in a Ligue 1 match as leaders Nice won 4–2 at Metz to maintain their advantage at the top of the table at four points.

Borussia Mönchengladbach
In July 2018, Pléa joined Borussia Mönchengladbach on a five-year contract. The transfer fee paid to Nice was reported as €25 million. He made his debut for the club against BSC Hastedt in the first round of the DFB-Pokal on 19 August 2018 and scored a hat-trick as Gladbach cruised to an 11–1 win. He scored his first Bundesliga goal for the club on 1 September, securing a 1–1 draw away to Augsburg. He finished his debut season as the club’s top scorer with 12 league goals and 15 across all competitions.