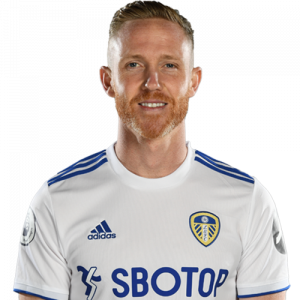 Adam John Forshaw (born 8 October 1991) is an English professional footballer who plays for Leeds United as a midfielder. He began his career in the academy at Premier League side Everton and came to prominence at Brentford, with whom he won the 2013–14 League One Player of the Year award.

Everton
Forshaw joined the Everton academy at age seven. Prior to the beginning of the 2008–09 season, he was offered a place as a first-year scholar and soon claimed a regular place in the U18 squad. Towards the end of an injury-hit 2008–09 season, Forshaw made his reserve team debut on 29 March 2009, playing the full 90 minutes of a 2–0 win over Wigan Athletic. First team manager David Moyes gave Forshaw his competitive debut in a dead rubber Europa League group stage match against BATE Borisov on 17 December 2009, in which he played the full 90 minutes. Forshaw was an unused substitute on two other occasions during the 2009–10 season and was the leading appearance-maker for the reserve team.

Brentford
On 24 February 2012, Forshaw joined League One club Brentford on a one-month youth loan. He made his debut the following day as a 69th-minute substitute for Sam Saunders in a 0–0 draw with Scunthorpe United. Forshaw made seven appearances and returned to Everton after sustaining a broken jaw in a 2–0 victory over Rochdale on 24 March.

Wigan Athletic
On 1 September 2014, Forshaw joined Championship side Wigan Athletic on a four-year contract for an undisclosed fee, believed to be approximately £2.5 million. The move reunited him with his former Brentford manager Uwe Rösler, but the move proved to be an abortive one, with Rösler being sacked in November 2014 and after 17 appearances and one goal, Forshaw left the DW Stadium on 28 January 2015.

Middlesbrough
On 28 January 2015, Forshaw joined Championship club Middlesbrough on a 3½-year contract for an undisclosed fee, believed to be £2 million. In what remained of the 2014–15 season, he made 20 appearances and experienced another playoff final defeat,when he looked on as an unused substitute as Boro were beaten 2–0 by Norwich City.

Forshaw made his Leeds debut starting in Leeds’ 0–0 draw against Hull City on 30 January 2018.[53] After starting for the side since his debut, on 24 February Forshaw missed Leeds’ 1–0 win against his former side Brentford with his wife going into labour. He aggravated a previous calf injury against Sheffield Wednesday on 17 March, which limited his number of performances before the end of the season.

During the 2018 preseason, Forshaw sustained a toe injury which on 3 August was reported to require surgery and keep him out for up to eight weeks. He returned from injury on 15 September, as a substitute in the 1–1 draw against Millwall.

Forshaw was highly praised for his performance in a newer role as defensive midfielder in a 2–0 win against Derby County on 11 January 2019, with Yorkshire Evening Post journalist Phil Hay describing it as ‘arguably his best for Leeds’.

During the 2018–19 season, Forshaw played 32 games in all competitions, after Leeds finished the regular season in third place after dropping out of the automatic promotion places with 3 games left after a defeat to 10-man Wigan Athletic on 19 April,Leeds qualified for the playoffs, Forshaw started the first leg for Leeds in the semi-final playoffs match against sixth-placed Derby County but was replaced by Jamie Shackleton after an injury in the 1st half during a 1–0 win at Pride Park, to bring into a 1–0 aggregate lead into the home leg at Elland Road, however Leeds were beaten on 4–3 aggregate over the two legs. With Forshaw out injured as Leeds lost 4–2 in an encounter that saw both teams reduced to 10 men and Derby progress to the final against Aston Villa.

The problem with Forshaw is a little longer [than for Gaetano Berardi]: he hasn’t played for over a year now. And a medical decision taken recently admit us to think he will play again in the not too distant future. Forshaw is a professional who looks after his health very much, that’s why I think that as soon as his injury problems are resolved he will be able to compete very quickly.