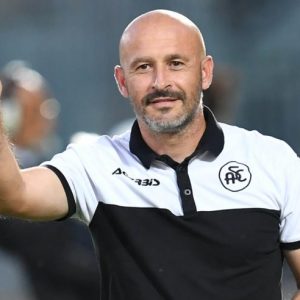 Vincenzo Italiano (born 10 December 1977) is an Italian football manager, who is currently in charge of Spezia, and a former player.

Born in Karlsruhe, Germany to Italian parents, Italiano never played professionally in Germany, instead playing his full career in Italian football. He was a versatile midfielder, known for his tackling and passing. He played for Genoa and (for most of his career) Hellas Verona first in Serie A and later, in Serie B.

He made his debut in Serie A with Hellas Verona and then appeared in Serie A again, albeit briefly, with cross-city rivals Chievo on 14 January 2007 against Catania.

After his retirement as a player, he started a coaching career in Veneto for a number of amateur teams. In 2017 he joined Union ArzignanoChiampo, which won him interest from Serie C club Trapani who hired him for the 2018–19 season.

Under his guidance, Trapani concluded the 2018–19 season in second place behind champions Juve Stabia, and then successfully contested the playoff phase, winning promotion to Serie B after defeating Piacenza 2–0 on aggregate.

He was subsequently hired by another Serie B club, Spezia, as the club’s new head coach for the 2019–20 season. He achieved promotion with Spezia to Serie A for the first time in the club’s history after edging Frosinone in the promotion play-offs.