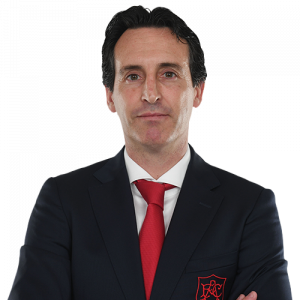 Unai Emery Etxegoien (born 3 November 1971) is a Spanish football coach and former player who is the head coach of La Liga side Villarreal.

After a career spent playing mostly in Spain’s Segunda División, Emery transitioned into coaching after retiring in 2004. He began at Lorca Deportiva, where he achieved promotion to the Segunda División in his first season. He then joined Almería, who he led to promotion to La Liga for the first time in the club’s history. He subsequently moved to Valencia, leading the team to top-three finishes. After leaving Valencia, he coached Spartak Moscow for six months, before moving to Sevilla in 2013.

At Sevilla, Emery won an unprecedented three consecutive Europa Leagues, and moved to French club Paris Saint-Germain in 2016. There, he won a Ligue 1 title, two Coupe de France titles, two Coupe de la Ligues, and two Trophée des Champions, which included a domestic quadruple in his second season. After the expiry of his contract, Emery was appointed as head coach of English club Arsenal in 2018, succeeding Arsène Wenger. He finished Europa League runner-up in his first season, before being dismissed in November 2019 after a series of poor results. He was hired by Villarreal in July 2020, where he won the Europa League in his first season.

On 23 July 2020, Emery was announced as the new head coach of La Liga side Villarreal, succeeding Javier Calleja on a three-year deal. On 23 December, he broke the club record of 18 matches unbeaten, after a 1–1 draw at home to Athletic Bilbao.

In May 2021, he led Villarreal to their first European final, after a 2–1 win on aggregate over his former club Arsenal in the semi-finals; he was the first ex-Gunners boss to beat his former team since George Graham in 1999. On 26 May, Villarreal won the Europa League final against Manchester United in Gdańsk, 11–10 on penalties after a 1–1 draw, to give him his fourth and a record win in the competition.