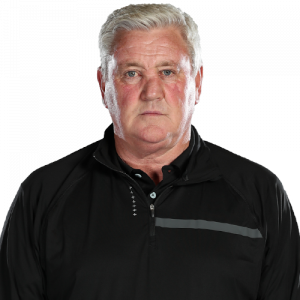 Stephen Roger Bruce (born 31 December 1960) is an English professional football manager and former player who played as a centre-back. He is the current manager of Newcastle United.

Born in Corbridge, Northumberland, he was a promising schoolboy footballer but was rejected by several professional clubs. He was on the verge of quitting the game altogether when he was offered a trial with Gillingham. Bruce was offered an apprenticeship and went on to play more than 200 games for the club before joining Norwich City in 1984, winning the League Cup in 1985. In 1987, he moved to Manchester United, with whom he achieved great success, winning twelve trophies including three Premier League titles, three FA Cups, one League Cup and the European Cup Winners’ Cup. He also became the first English player of the 20th century to captain a team to the Double. Despite his success on the field, he was never selected to play for the England national team. Commentators and contemporaries have described him as one of the best English players of the 1980s and 1990s never to play for his country at full international level.

Bruce began his managerial career with Sheffield United, and spent short periods of time managing Huddersfield Town, Wigan Athletic and Crystal Palace before joining Birmingham City in 2001. He twice led Birmingham to promotion to the Premier League during his tenure of nearly six years, but resigned in 2007 to begin a second spell as manager of Wigan. At the end of the 2008–09 season he resigned to take over as manager of Sunderland, a post he held until he was dismissed in November 2011. Seven months later, he was appointed manager of Hull City and led the club to two promotions to the Premier League, as well as the 2014 FA Cup Final, before leaving in July 2016. He took over at Aston Villa four months later but was dismissed in October 2018. He took over as manager of Sheffield Wednesday in February 2019, and left in July that year to take over at Newcastle United.