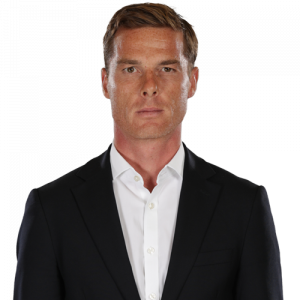 Scott Matthew Parker (born 13 October 1980) is an English professional football manager and former player who played as a midfielder. He is the manager of Premier League club Fulham.

Parker began his career at Charlton Athletic, and was loaned to Norwich City, before joining Chelsea for a £10 million fee in January 2004. He did not play regularly at Chelsea, and moved to Newcastle United the following year, where he was made captain. Parker joined West Ham United in 2007, and was the FWA Footballer of the Year for the 2010–11 season despite the club being relegated. He was then signed by Tottenham Hotspur and joined Fulham in 2013. He would play 119 league matches for Fulham in both the Premier League and the Championship, before retiring at the end of the 2016–17 season.

He has represented England at every level from under-16 to senior, making his full debut in 2003. Uniquely, he won his first four England caps while playing for four different clubs. Parker was a member of the England team which reached the quarter-finals at UEFA Euro 2012.