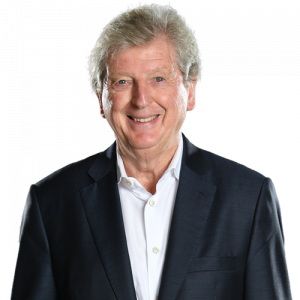 Roy Hodgson (born 9 August 1947) is an English professional football manager and former player who is the manager of Premier League club Crystal Palace. He has managed 16 different teams in eight countries, beginning in Sweden with Halmstads BK in the 1976 season. He later guided the Switzerland national team to the last 16 of the 1994 World Cup and qualification for Euro 1996; Switzerland had not qualified for a major tournament since the 1960s. From 2006 to 2007, he managed the Finland national team, guiding them to their highest-ever FIFA ranking of 33rd place and coming close to qualifying for a major tournament for the first time in their history. He managed the England national team from May 2012 to June 2016. Other clubs that Hodgson has managed include Inter Milan, Blackburn Rovers, Malmö FF, Grasshoppers, FC Copenhagen, Udinese, Fulham, Liverpool and West Bromwich Albion.