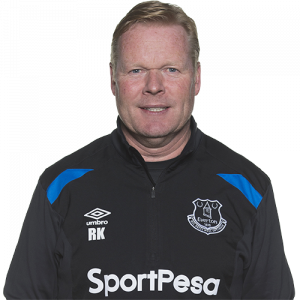 Ronald Koeman (born 21 March 1963) is a Dutch professional football manager and former player, who is the current head coach of La Liga club Barcelona. He is the younger brother of his former international teammate Erwin Koeman and the son of former Dutch international Martin Koeman. Koeman was capable of playing both as a defender and as a midfielder; he frequently played as a sweeper, although he was equally known for his goalscoring, long–range shooting, and accuracy from free kicks and penalties.

Born in Zaandam, Koeman began his career at Groningen before transferring to the Netherlands’ most successful club Ajax in 1983, where he won the national Eredivisie title in 1984–85. He then joined Ajax’s rivals PSV Eindhoven in 1986, winning three consecutive Eredivisie titles (1986–87, 1987–88 and 1988–89) and the European Cup in 1988. Ronald Koeman is one of five European players to ever win a treble with their club and a cup with their national team in the same year. The other four players are his teammates Hans van Breukelen, Berry van Aerle, Gerald Vanenburg and Wim Kieft. In 1989, Koeman moved to Barcelona and became part of Johan Cruyff’s “Dream Team”, helping the club win La Liga four years in a row between 1991 and 1994, and the 1991–92 European Cup, where he scored the winning goal of the final against Sampdoria.

At international level, Koeman was one of the stars of the Netherlands national team, alongside Marco van Basten, Ruud Gullit, Frank Rijkaard and Dennis Bergkamp. During his career with the Netherlands, Koeman won UEFA Euro 1988 and played at the UEFA Euro 1992, 1990 and 1994 FIFA World Cups, captaining the team at the latter.

As a head coach, Koeman has won three Eredivisie titles: twice with Ajax (2001–02 and 2003–04) and once with PSV Eindhoven (2006–07). He is the only individual to have both played for and managed the “Big Three” of Dutch football: Ajax, PSV and Feyenoord. Abroad, he had spells in Portugal with Benfica and Spain with Valencia, coaching Los Ché to victory in the 2007–08 Copa del Rey, and managed Premier League clubs Southampton and Everton in the 2010s. He was the manager of the Netherlands national team between 2018 and 2020. In August 2020, he was appointed as the manager of Barcelona following the departure of Quique Setién.