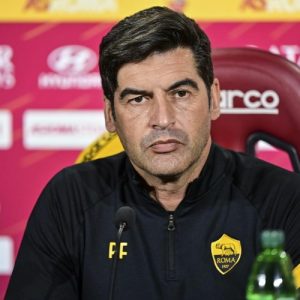 Paulo Alexandre Rodrigues Fonseca (born 5 March 1973) is a Portuguese former professional footballer who played as a central defender, and is the current manager of Italian club A.S. Roma.

He amassed Primeira Liga totals of 111 matches and three goals over seven seasons, mainly with Estrela da Amadora. He became a manager in 2005, notably winning the 2015–16 Taça de Portugal with Braga as well as three editions of the Ukrainian Premier League with Shakhtar Donetsk.

Born in Nampula, Portuguese Mozambique, Fonseca played 14 years as a senior, beginning with F.C. Barreirense in the third division and moving straight to the Primeira Liga with Leça F.C. in the 1995–96 season, starting in 21 of his league appearances as the club finished 14th and narrowly avoided relegation. In the following five years he continued in the latter competition, being first choice with C.F. Os Belenenses and C.S. Marítimo but only a backup with Vitória S.C. and C.F. Estrela da Amadora.

Fonseca retired in June 2005 at the age of 32 after a further four campaigns with Estrela, three of those spent in the second level. In the 2003–04 campaign he participated in 15 games as the Lisbon side ranked last in the top tier, with the subsequent relegation.

Fonseca started coaching immediately after retiring, remaining two years at the helm of Estrela da Amadora’s youths. From 2007 to 2011 he was in charge of several modest teams, notably C.D. Pinhalnovense which he led to the quarter-finals of the Taça de Portugal in both the 2009–10 and 2010–11 seasons.

In 2011–12, Fonseca was appointed at C.D. Aves in division two for his first job in the professionals, and he led the team to the third position, just two points shy of promotion. In the following campaign he signed for F.C. Paços de Ferreira, again finishing third to qualify the club for their maiden campaign in the UEFA Champions League; highlights included winning both games against S.C. Braga (2–0 at home, 3–2 away) and Sporting CP (1–0 on both occasions).

Fonseca succeeded Vítor Pereira at the helm of back-to-back-to-back national champions FC Porto, signing a two-year contract on 10 June 2013. He started his spell on a high note, winning the year’s Supertaça Cândido de Oliveira after a 3–0 triumph against Vitória de Guimarães which marked his first honour as a coach.

However, on 5 March 2014, following a string of poor results that left the club in the third position in the league, nine points behind leaders S.L. Benfica, Fonseca was relieved of his duties. Previously, on 12 January, he had stated that Porto would be champions in the last matchday against that opponent.

From 2014 to 2016, Fonseca continued working in his country’s top flight, with Paços and Braga. He led the latter to the fourth position, also winning the domestic cup.

Fonseca moved abroad for the first time in his career on 31 May 2016, replacing legendary Mircea Lucescu (12 seasons) at the helm of FC Shakhtar Donetsk and signing a two-year contract at the Ukrainian Premier League side. He always won the double during his spell– which earned him the distinction as the league’s best coach in 2016–17– and reached the round of 16 of the 2017–18 UEFA Champions League,[22] after finishing second in the group stage following a 2–1 home win over Premier League’s Manchester City.

On 11 June 2019, Fonseca was appointed manager of A.S. Roma. He led the side to the fifth place in the Serie A in his first season, as well as the semi-finals of the subsequent UEFA Europa League. He announced his departure in May 2021.