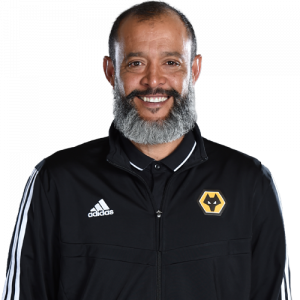 Nuno Herlander Simões Espírito Santo (born 25 January 1974), known simply as Nuno as a player, is a Portuguese former footballer who played as a goalkeeper, and is the current head coach of Premier League club Wolverhampton Wanderers.

During his career he first made a name for himself in Spain, playing for three teams in five years. He later returned to Portugal to represent Porto, and also played professionally in Russia; he was part of the Portuguese squad at Euro 2008, but never won a cap for the national team.

Espirito Santo started his coaching career at the Greek club Panathinaikos as an assistant. He became a manager in 2012, leading the Portuguese club Rio Ave to both domestic cup finals in 2014 before taking the reins at Valencia in Spain’s La Liga.