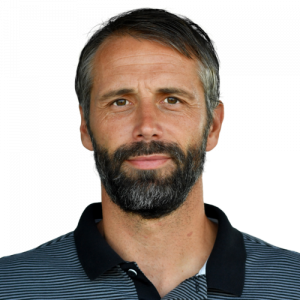 Marco Rose (born 11 September 1976) is a German professional football manager and former player who is the manager of Bundesliga club Borussia Mönchengladbach. As a player, he played as a defender for Lokomotive Leipzig, Hannover 96 and Mainz 05. Later he coached Mainz 05’s second team, then Lokomotive Leipzig, before going through the ranks at Red Bull Salzburg. He is set to join fellow Bundesliga side Borussia Dortmund ahead of the 2021–22 season.

The defender started his career at Rotation Leipzig, and joined 1987 Lokomotive Leipzig, which later got renamed to VfB Leipzig. Rose played ten games in the second flight for VfB. In 2000, Rose joined Hannover 96. When Hannover reached promotion to the Bundesliga in 2002, Rose joined Jürgen Klopp’s Mainz 05 on loan. When Mainz won itself the promotion to the Bundesliga, they signed Rose permanently. Rose resigned after 199 games for Mainz’s first and second team. He scored seven goals, three of them in the Bundesliga.

Rose joined Red Bull Salzburg’s U16 team in the 2013–14 season. When U18 coach Thomas Letsch joined FC Liefering, Rose succeeded him as U18 coach. The team won the Austrian U18 championship in his first season and the UEFA Youth League in April 2017 beating Benfica 2–1 in the finals.

For the 2017–18 season, Rose succeeded Óscar García as head coach of RB Salzburg. In his first season, the team won the Austrian championship and reached the semi-finals of the Europa League, beating teams like Borussia Dortmund and Lazio. The final of the Austrian cup against Sturm Graz was lost. In the second season, RB Salzburg started the league with ten wins which broke the previous record of the league. In the Europa League, they reached the quarter final against Napoli. Rose never lost a home game during his tenure as head coach of Salzburg.

For the 2019–20 season, Rose joined Borussia Mönchengladbach. In the 2020–21 UEFA Champions League, he managed to reach the knockout stages.

On 15 February 2021, Mönchengladbach announced that Rose would leave at the end of the season to join Borussia Dortmund.