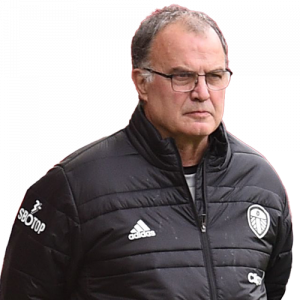 Marcelo Alberto Bielsa Caldera is an Argentine professional football manager and the head coach of Premier League club Leeds United. He is a former player and played as a defender for Newell’s Old Boys, Instituto de Córdoba, and Argentino de Rosario.

Bielsa played as a defender in Newell’s Old Boys’ First Division team, but retired when he was 25 to focus on coaching. Bielsa has managed several football clubs and also the national teams of Argentina and Chile. He developed his career as coach of Newell’s Old Boys where he won several titles in the early 1990s, before moving to Mexico in 1992, briefly coaching Club Atlas and Club América. Bielsa returned to Argentina in 1997 to manage Vélez Sarsfield, leading them to the 1998 league title (Clausura).

With Chile, he achieved cult status due to the improved results of the national team under his leadership. His personality and gestures during his stint in Chile captured the attention of media and unleashed a series of minor controversies both in sports and politics. He had a two year-spell in Spain at Athletic Bilbao between 2011 and 2013, leading them to domestic and continental cup finals in the first season, though they lost both. On 8 August 2015, Bielsa resigned as coach of Marseille after just over a year at the French club.

In June 2018, he was appointed manager of then Championship club Leeds United, leading the club to promotion back to the Premier League in 2020 after a 16-year absence. Leeds United is the club at which he has spent the most time as manager in his career.