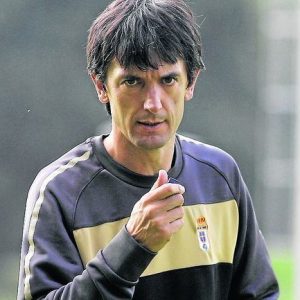 José Rojo Martín (born 23 March 1968), known as Pacheta, is a Spanish former footballer who played as a midfielder, and is the current manager of Real Valladolid.

He amassed La Liga totals of 183 matches and 15 goals over eight seasons, representing in the competition Real Burgos, Espanyol and Numancia. He added 112 games and 17 goals in Segunda División.

In 2009, Pacheta became a manager. In June 2007, Pacheta was appointed Numancia’s director of football, switching to first-team manager on 17 February 2009 as a replacement for the fired Sergije Krešić. He remained in charge for the following 15 matches, as the Soria side were eventually relegated from the top flight.

On 15 February 2011, Pacheta signed for Real Oviedo in division three, leading the club to the eighth place and renewing his contract for a further year in May. On 24 May 2012 he resigned, and joined FC Cartagena on 10 December.

On 20 May 2013, Pacheta was relieved of his duties despite earning runner-up honours in the league with the Murcians, albeit without promotion to the second tier. He moved abroad in August, being appointed at Ekstraklasa side Korona Kielce.

Pacheta left the Polish team in June 2014, and signed with Hércules CF shortly after. On 25 January of the following year, he was sacked after only managing to win three out of 12 home games.

On 27 February 2018, after an experience in Thailand with Ratchaburi Mitr Phol FC, Pacheta replaced the dismissed Josico at the helm of Elche CF. On 22 May 2019, after achieving promotion to the second division the previous campaign, he renewed his contract for a further season.

Just two days after promoting to the top tier in the play-offs, Pacheta left the Estadio Manuel Martínez Valero on 25 August 2020. The following 12 January, he took over for Míchel at SD Huesca in the same league. After an impressive spell at Huesca, he was not able to stop the team from relegating and parted ways with the club at the end of the season.

On 16 June 2021, Pacheta was appointed manager of Real Valladolid, also relegated to the second division.