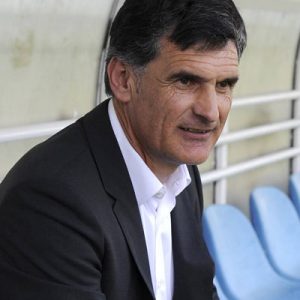 José Luis Mendilibar Etxebarria (born 14 March 1961) is a Spanish retired footballer who played as a midfielder, and is a current manager.

He played no higher than Segunda División, where he made 290 appearances and scored 34 goals mainly for Sestao and also for Logroñés. He managed for over 15 years in La Liga for Athletic Bilbao, Valladolid, Osasuna, Levante and Eibar, winning the second division with the second of those teams in 2006–07.

After retiring in 1994, Mendilibar worked in the youth categories of Athletic Bilbao before being appointed head coach of UD Lanzarote and then SD Eibar. His success with the latter in the second division, on a very limited budget, translated into a narrow miss on promotion in 2005.

Mendilibar then returned to Athletic, the club he supported as a child. He was sacked after a few months, as the Lions were eliminated from the Intertoto Cup in the opening round and were bottom of the league with just one win in nine matches.

Slightly less than one year later, Mendilibar returned to work, replacing the fired José Antonio Camacho at CA Osasuna. His first game in charge was a 4–0 home win against RCD Espanyol, on 20 February 2011. On 3 September 2013, he was relieved of his duties after three losses in as many matches to kickstart the new season.

On 29 May 2014, Mendilibar was appointed at Levante UD, signing a one-year contract with an option for a second season. On 20 October, after only one win in eight games, and no goals scored and 14 conceded from four home fixtures, he was dismissed.

Mendilibar returned to Eibar on 30 June 2015, replacing Gaizka Garitano. In 2016–17, he led the team to a best-ever quarter-final finish in the Copa del Rey before an injury-stripped squad lost 5–2 on aggregate to Atlético Madrid; he and Asier Garitano of CD Leganés were joint recipients of the year’s Miguel Muñoz Trophy for best manager. The following year they came ninth in the league, again a club record.

In May 2021, shortly after the team’s relegation, Mendilibar announced that he would not renew his contract at Eibar.