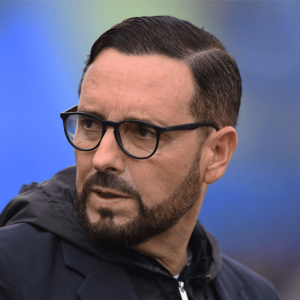 José Bordalás Jiménez (born 5 March 1964) is a Spanish former footballer who played as a striker, and is the current manager of Valencia CF.

Bordalás worked exclusively in his region of birth for 19 years, his first job being at Alicante CF’s reserves in 1993. The following year, he was appointed at the main squad.

After three years with as many teams, Bordalás returned to Alicante in 1998, taking them from the regional leagues to Segunda División B in only three seasons. His first experience in the Segunda División arrived with former club Hércules, replacing fired Juan Carlos Mandiá midway through 2005–06 and being sacked himself only seven games into the following campaign.

Bordalás returned to division three in 2007–08 with CD Alcoyano, leading the side to the first position in the following season and the subsequent failure in the promotion playoffs. In early October 2009 he terminated his contract amicably, signing with Elche CF of the second tier.

After two spells at AD Alcorcón, Bordalás was named Deportivo Alavés manager on 11 June 2015. He led the team back to La Liga after ten years in his first season, as champions, but was still relieved of his duties on 21 June 2016.

Bordalás was hired by Getafe CF in September 2016, replacing the dismissed Juan Esnáider on a deal until the end of the campaign. He again won promotion to the top flight, this time by a 3–2 aggregate victory over CD Tenerife in the playoff final the following June. Following an eighth-place finish in his first season at that level, he led the Community of Madrid team to a best-ever fifth position and only missed qualification for the UEFA Champions League on the last matchday in May 2019; he earned the Miguel Muñoz Trophy for best coach for this feat.

Bordalás was appointed head coach of Valencia CF in May 2021, signing a two-year contract.