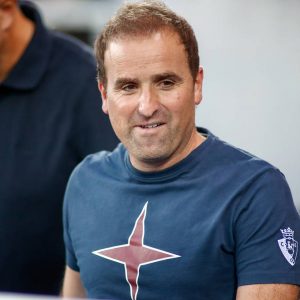 Jagoba Arrasate Elustondo (born 22 April 1978) is a Spanish former footballer who played as a forward, and is the current manager of CA Osasuna.

Born in Berriatua, Biscay, Arrasate only played for lower league clubs during his ten-year senior career, the majority in Tercera División and all in his native Basque Country. In Segunda División B he represented SD Eibar B and Club Portugalete, being relegated with the latter team at the end of the 2005–06 campaign.

Arrasate retired in 2007 at only 29, after one season in the fourth tier with SD Amorebieta.

Arrasate became a coach immediately after retiring, his first two clubs being amateur. In 2010, he returned to Real Sociedad where he had been groomed, being appointed coach of the youth teams.

In July 2012, Arrasate was promoted to Real’s first team as assistant to Philippe Montanier. The following year, as the Frenchman left for Stade Rennais FC, he was named his successor. He led the team in their 2013–14 UEFA Champions League campaign, in which they defeated Olympique Lyonnais to qualify for the group stage, but finished bottom of the section.

In April 2014, Arrasate had his contract renewed until 2016. However, in November, he was relieved of his duties after a string of poor results.

Arrasate was appointed at the helm of CD Numancia on 12 June 2015, replacing Juan Antonio Anquela. In the 2017–18 campaign, he led the Sorians to the finals of the play-offs, but missed out promotion after a 1–4 aggregate loss to Real Valladolid; he stepped down on 18 June 2018.

On 20 June 2018, Arrasate was named CA Osasuna manager after agreeing to a one-year contract. He renewed his contract until 2020 the following 5 March,[10] and achieved promotion to La Liga as champions.