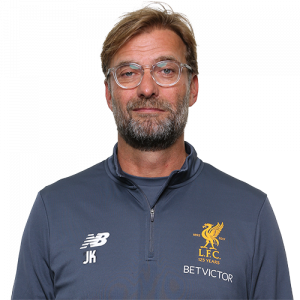 Jürgen Norbert Klopp (born 16 June 1967) is a German professional football manager and former player who is the manager of Premier League club Liverpool. He is widely regarded as one of the best managers in the world.

Klopp spent most of his playing career at Mainz 05; a hard-working and physical player, he was initially deployed as a striker, before being moved to defence. Upon retiring in 2001, Klopp became the club’s manager, and secured Bundesliga promotion in 2004. After suffering relegation in the 2006–07 season and unable to achieve promotion, Klopp resigned in 2008 as the club’s longest-serving manager. He then became manager of Borussia Dortmund, guiding them to the Bundesliga title in 2010–11, before winning Dortmund’s first-ever domestic double during a record-breaking season.Klopp also guided Dortmund to a runner-up finish in the 2012–13 UEFA Champions League before leaving in 2015 as their longest-serving manager.

Klopp was appointed manager of Liverpool in 2015. He guided the club to successive UEFA Champions League finals in 2018 and 2019, winning the latter to secure his first – and Liverpool’s sixth – title in the competition. Klopp’s side finished second in the 2018–19 Premier League, registering 97 points; the then third-highest total in the history of the English top division, and the most by a team without winning the title. The following season, Klopp won the UEFA Super Cup and Liverpool’s first FIFA Club World Cup, before delivering Liverpool’s first Premier League title, en route to which his side scored 99 points – the second-highest total in the English top division – and broke a number of top-flight records. These achievements won him back-to-back FIFA Coach of the Year awards in 2019 and 2020.