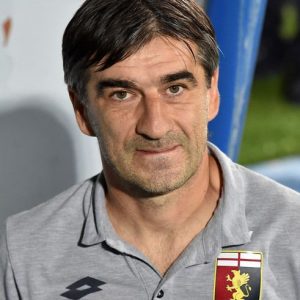 Ivan Jurić (born 25 August 1975) is a Croatian football manager and former player who played as a midfielder, and is the current manager of Serie A club Hellas Verona.

Jurić spent most of his playing career and his entire managing career in Italy. Since 2019, he has been the manager of Italian club Hellas Verona.

A versatile and technically skilled midfielder or winger, Jurić started his career with Hajduk Split, where he played from 1993 to 1997. He then moved to Spain to join Sevilla FC, where he played from 1997 to 2001, except for a short loan to Albacete in 2000. After a short time back in Croatia with Šibenik, he moved in Italy in 2001 to join Serie B team Crotone, and then moved to Genoa in 2006, following his mentor Gian Piero Gasperini, his former head coach at Crotone. Since then, he established himself as a fan favourite, being protagonist of the rossoblu’s return to Serie A, and then being appointed vice-captain for the team.

He announced his retirement on June 2010, at the age of 34, contemporaneously confirming his interest in becoming a football coach.

Jurić made his international debut for Croatia in a friendly match against Romania on 11 February 2009 and went on to play five times with his national team, though did not score any goals.

After retiring as a football, Jurić stayed at Genoa as youth team coach for the 2010–11 season. He passed the UEFA A coaching exam in June 2011.

On 5 July 2011, new Inter manager Gian Piero Gasperini unveiled Jurić as one of his first team coaches in the new club, but was removed from his post the following September together with Gasperini and his entire staff. He re-united with Gasperini in September 2012, as new assistant coach of his at Palermo.

His Crotone side won promotion in 2015–16 season to the top flight Serie A for the 2016–17 season for the first time in the club’s history.

After achieving promotion with Crotone, he was offered to replace his mentor Gasperini at his former club Genoa in June 2016, which he accepted, thus becoming the new head coach of the Grifone.

He was sacked on 19 February 2017 after a 0–5 defeat against bottom-placed Pescara.[8] He was reinstated as Genoa manager on 10 April 2017 after the sacking of Andrea Mandorlini. On 9 October 2018, he was appointed manager of Genoa for a third time. On 6 December 2018, he was sacked again after losing to third tier Virtus Entella on penalties in the Coppa Italia.