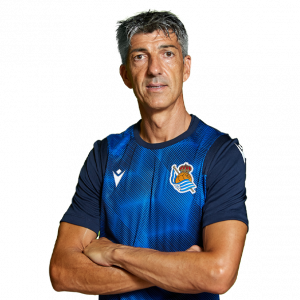 Imanol Alguacil Barrenetxea (born 4 July 1971), known simply as Imanol as a player, is a Spanish retired footballer who played as a right back, and is the current manager of Real Sociedad.

He appeared in 121 matches in La Liga over nine seasons (eight goals scored), representing Real Sociedad and Villarreal. In 2014 he started working as a manager, with a four-year spell with Real Sociedad B followed by a short stint with the club’s senior team in spring 2018, a role he was asked to take on again in the winter of the same year.

On 26 July 2011, Alguacil returned to his first club Real Sociedad, being appointed manager of the youth setup. On 17 June 2013 he was named reserve team coach Asier Santana’s assistant, and was also in charge of the main squad along with Santana in November 2014 after Jagoba Arrasate’s dismissal.

After the arrival of David Moyes in November 2014, Alguacil was included in the first team staff, but he was appointed manager of the B side late in that month. On 19 March 2018, he replaced fired Eusebio Sacristán at the helm of the main squad until the end of the season.

In the summer of 2018, Alguacil returned to the reserves and Asier Garitano took over the senior role, but in December of the same year the latter was dismissed following a poor sequence of results and the former again became the first team coach. Following a strong start to the 2019–20 campaign, he was given a one-year contract extension.

Alguacil led Real to their first trophy since 1987 on 3 April 2021, with a 1–0 victory against Basque rivals Athletic Bilbao in the 2020 Copa del Rey Final (postponed due to the COVID-19 pandemic). In the post-match press conference he celebrated by putting on a team jersey and scarf and chanting in joy.