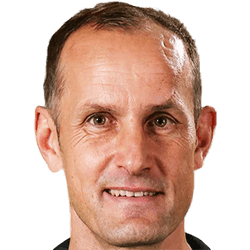 Heiko Herrlich (born 3 December 1971) is a German football manager and former forward. He currently manages FC Augsburg.
On 21 June 2013, he became the manager for the Bayern Munich U-17 team. In June 2015, Bayern Munich restructured their youth department and Herrlich left Munich.

On 20 December 2015, he took over Jahn Regensburg. His contract was scheduled to run up to the end of the 2015–16 season, with an extension for another year if the Jahn achieved promotion to the 3. Liga. The Ratisbon based club achieved back to back promotions under Herrlich’s reign, returning to 2.Liga at the end of the 2016–17 season.

On 9 June 2017, it was announced that Herrlich will return to Leverkusen as new head coach.

On 23 December 2018, Bayer Leverkusen announced they would be parting ways with Herrlich, citing bad tactics and poor overall performance.

He was appointed as the new head coach of FC Augsburg on 10 March 2020.