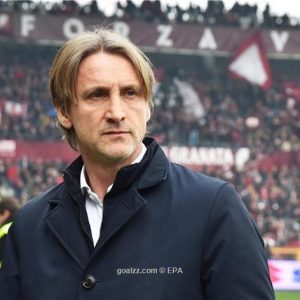 Davide Nicola (born 5 March 1973) is an Italian former football player and the current manager of Torino.

During his time in Genoa C.F.C. he was noted for kissing a policewoman on the sideline after a goal. He also helped the club to lift the 1996 Anglo-Italian Cup.

In the Serie B 2005–06 playoffs he scored a goal that gave his Torino F.C. a promotion to Serie A. In the 2006–07 season of Serie B his good play for Spezia Calcio in the last few games contributed to Spezia avoiding relegation.

In July 2010 Nicola retired from playing for Lumezzane in order to replace the outgoing head coach Leonardo Menichini at the helm of the club.[3] On 28 June 2011, his contract was renewed.

During the 2012–13 season, Nicola became the head coach of Livorno in Serie B. In January 2014, Livorno sacked Nicola with the club second-from-bottom in the Serie A table.

On 21 April 2014, Nicola was appointed manager of Livorno again.

On 23 June 2016, Nicola was appointed manager of Serie A newcomers Crotone. Nicola promised to ride a bicycle from Crotone to his home in Turin if they avoided relegation. Crotone finished in 17th place, two points above the relegation zone, and ahead of Empoli on the final matchday of the season in what was hailed as a football miracle, as Crotone had collected only nine points in the whole first half of the season. Fulfilling the promise, Nicola rode 1300 km from Crotone to Turin on a bicycle.

On 13 November 2018, Nicola was appointed manager of Udinese.

On 28 December 2019, Nicola was appointed manager of Genoa.

On 19 January 2021, following the sacking of Marco Giampaolo, Nicola was appointed manager of Torino. In his first game in charge, Simone Zaza scored two second-half goals to help Torino draw 2–2 with Benevento, having been two goals down.