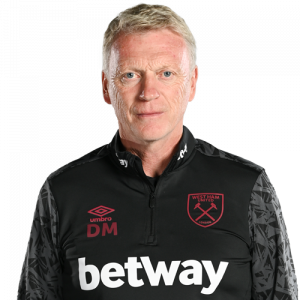 David William Moyes (born 25 April 1963) is a Scottish professional football coach and former player. He is currently the manager of Premier League club West Ham United. He was previously the manager of Preston North End, Everton, Manchester United, La Liga club Real Sociedad and Sunderland. Moyes was the 2003, 2005 and 2009 League Managers Association Manager of the Year. He is also on the committee for the League Managers Association in an executive capacity.

Moyes made over 540 league appearances as a centre-back in a playing career that began with Celtic, where he won a championship medal. He then played for Cambridge United, Bristol City, Shrewsbury Town and Dunfermline Athletic before ending his playing career with Preston North End. He became a coach at Preston, working his way up to assistant manager before eventually taking over as manager in 1998, his first managerial position. Moyes led Preston to the Division Two title in 1999–2000 and the Division One play-off final the following season.

Moyes took over from Walter Smith as manager of Everton in March 2002. Under him, the club managed a fourth-place finish in the league in 2004–05, their highest finish since 1988, and played in the qualifying rounds for the UEFA Champions League the following season, the first time they had taken part in the European Cup since 1970–71. Moyes also led Everton to a runners-up finish in the 2008–09 FA Cup, their best performance in the competition since winning it in 1995. Everton consistently finished between fifth and eighth in the league under Moyes, and at the time of his departure, he was the longest-serving current manager in the league behind Sir Alex Ferguson and Arsène Wenger, at 11 years and 3 months.

He succeeded Ferguson as manager of Manchester United in June 2013, but with the club in seventh place in the league in April 2014 and unable to qualify for European competition, he was sacked after 10 months in the job. Moyes was appointed manager of Spanish club Real Sociedad in November 2014, but was again sacked after just under a year in charge. In July 2016, he replaced Sam Allardyce as manager of Sunderland, but resigned at the end of the 2016–17 season after the club was relegated to the EFL Championship. Moyes was appointed manager of West Ham in November 2017 and led the club out of the relegation zone to a 13th-place finish, but left at the end of the season when his contract was not renewed. In December 2019 he was reappointed as manager of West Ham United for the second time, following the sacking of Manuel Pellegrini.