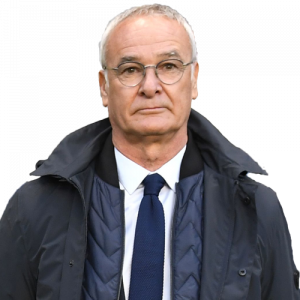 Claudio Ranieri Grande Ufficiale OMRI (born 20 October 1951) is an Italian football manager and former player who is the current head coach of Serie A club Sampdoria.

Ranieri began his managerial career in the lower leagues in Italy during the late 1980s, and made his name at Cagliari, whom he took from Serie C1 up to Serie A in successive seasons. He later went on to manage Napoli, where he led the team to qualify for the UEFA Cup, only to be dismissed the following season. In 1993, he joined Fiorentina, and immediately led them to Serie A promotion, also winning the Coppa Italia and the Supercoppa Italiana in 1996, before moving to Spain in 1997, to manage Valencia and then Atlético Madrid. With Valencia, he won a Copa del Rey and an UEFA Intertoto Cup, and helped the club to qualify for the UEFA Champions League. In 2000, Ranieri moved to England to become head coach at Chelsea. His four seasons there saw Chelsea improve their points total season on season, with them finishing runners-up in 2004 and reaching the UEFA Champions League semi-final the same season. He was dismissed by Chelsea owner Roman Abramovich that May, but a number of players he signed and brought through during his time at Stamford Bridge formed the core of the side that went on to achieve domestic and international success in subsequent seasons.

After an unsuccessful second spell back in Spain with Valencia, he returned to management in Italy in 2007, where he encountered mixed success with spells at Parma, Juventus, Roma and Inter Milan. In 2012, he was hired to manage Ligue 1 team Monaco, who had just finished in the middle of Ligue 2, and earned promotion as champions in his first season, then finished as Ligue 1 runners-up in his second season. This was followed by a foray into international management with the Greece national team, but he was dismissed less than four months later after a 1–0 home defeat against the Faroe Islands in the UEFA Euro 2016 qualifying.

Ranieri returned to England once more in the summer of 2015 as manager of Leicester City. He went on to win the 2015–16 Premier League, after the club had narrowly avoided relegation the season prior, and was named the 2016 Premier League Manager of the Season, and LMA Manager of the Year. He was also awarded the Grand Officer of the Italian Order of Merit and the Enzo Bearzot Award as best Italian manager of the year, as well as the 2016 Best FIFA Men’s Coach Award. He was dismissed by the club in February 2017 after a run of poor results. In June 2017, he joined Nantes as manager and spent a single season at the club. He was appointed Fulham manager in November 2018 before being dismissed in February 2019. Less than a month later, he returned as the head coach of Roma for the remainder of the 2018–19 season. Later that year, he was appointed as the coach of Sampdoria.