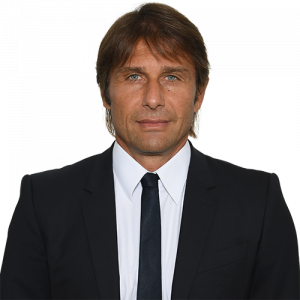 Antonio Conte (born 31 July 1969) is an Italian professional football manager and former player. He is the head coach at Serie A club Inter Milan.

Playing as a midfielder, Conte began his career at local club Lecce and later became one of the most decorated and influential players in the history of Juventus. He captained the team and won the UEFA Champions League, as well as five Serie A titles, among other honours. He also played for the Italy national team and was a participant at the 1994 FIFA World Cup and UEFA Euro 2000, where, on both occasions, Italy finished runners-up.

His managerial career started in 2006, leading Bari to the 2008–09 Serie B title, and Siena to promotion from the same division two years later. He then took over at Juventus in 2011, where he implemented a 3–5–2 formation and won three consecutive Serie A titles, before taking charge of the Italian national team in 2014 until the UEFA Euro 2016 campaign. He became the manager of Chelsea in April 2016 and led them to the Premier League title in his first season in charge, later winning the FA Cup in his second season with the team. He was dismissed as Chelsea manager in July 2018. He was announced as the new Inter Milan manager on 31 May 2019,[8] and won the Serie A title in his second season.

Conte is credited as to bringing back and popularizing the 3–5–2 formation after it had seen very limited use since its heyday at the 1990 World Cup.