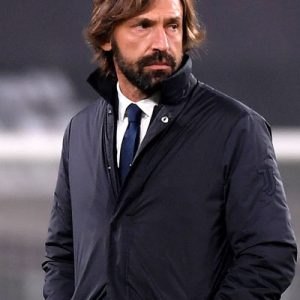 Andrea Pirlo (born 19 May 1979) is an Italian professional football coach and former player who is the head coach of Serie A club Juventus. Considered to be one of the greatest deep-lying playmakers of all time, Pirlo was renowned for his vision, ball control, technique, creativity, passing, and free-kick ability.

Pirlo began his club career in 1995 as an attacking midfielder with hometown club Brescia, winning the Serie B title in 1997. He signed for Serie A club Inter Milan a year later, but limited game time and loans away from the club saw him sold to cross-city rivals Milan in 2001. There, Pirlo matured into a world-class deep-lying playmaker, and won two Serie A titles, two UEFA Champions Leagues, two UEFA Super Cups, a FIFA Club World Cup, a Coppa Italia, and a Supercoppa Italiana. He departed Milan for Juventus in 2011, where he won four consecutive Serie A titles, as well as two Supercoppa Italiana titles, and another Coppa Italia. In 2015, Pirlo joined Major League Soccer (MLS) club New York City, with whom he played for two years before retiring in 2017.

At international level, Pirlo played 116 matches for the Italian national football team, which is the fifth-most of all time. He made his senior debut in 2002, and captained his nation to a bronze medal in the 2004 Olympics. Pirlo was instrumental in Italy’s triumph at the 2006 FIFA World Cup, winning the Bronze Ball and being elected to the Team of the Tournament. He repeated similar success as he led Italy to the final of the 2012 UEFA European Championships. Pirlo also represented his country at the 2004 and 2008 UEFA European Championships, the 2010 and 2014 FIFA World Cups, and the 2009 and 2013 FIFA Confederations Cups.

Pirlo finished in the top four five times in the IFFHS World’s Best Playmaker award between 2006 and 2015. He placed fourth in the UEFA Best Player in Europe award in 2011, and seventh in 2015, while he was named Serie A Footballer of the Year three times, and voted to the Serie A Team of the Year four times. Pirlo was named in the UEFA Team of the Year in 2012, the UEFA Champions League Squad of the Season in 2015, and was part of the FIFPro World XI in 2006. He also placed seventh in the 2007 FIFA World Player award, finished in the top ten three times for the Ballon d’Or, and was named an MLS All-Star in 2016. In 2019, Pirlo was elected into the Italian Football Hall of Fame.

Following his retirement, Pirlo was appointed as head coach at Serie C club Juventus U23. He took charge of the first team only nine days later.