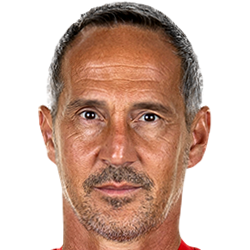 Adolf “Adi” Hütter (born 11 February 1970) is an Austrian professional football coach and former player who is the current head coach of Bundesliga club Eintracht Frankfurt. As a player, Hütter reached the 1993–94 UEFA Cup final, won the Austrian championship three times with Austria Salzburg and won the Austrian Cup with Grazer AK. As a coach, he won the Austrian double, again in Salzburg colors, as well as the Swiss championship, with Young Boys.

On 16 May 2018, Hütter was confirmed to be Eintracht Frankfurt’s next head coach, succeeding Niko Kovač. He started as coach on 1 July 2018. On 12 August 2018, he lost his first competitive match (German Super Cup) 5–0 to Bayern Munich. Then on 18 August 2018, Eintracht Frankfurt were knocked out in the first round of the German Cup by fourth division SSV Ulm. After a poor start of the 2018–19 Bundesliga season (just 4 points in five matchdays), Eintracht did not lose in the next 11 games, winning 10, in the Bundesliga and Europa League. Frankfurt had a similar winning streak in the second half of the season, and reached the semifinal of the Europa League where they drew two times and lost on penalties against Chelsea. At the end of the season, Hütter was voted by readers of German newspaper Bild as Coach of the Year while Eintracht Frankfurt was voted as the Team of the Year. The union of professional football players also voted Hütter as Coach of the Year.