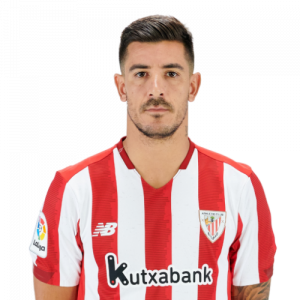 Yuri Berchiche Izeta (born 10 February 1990) is a Spanish professional footballer who plays for Athletic Bilbao as a left-back.

Early years and Tottenham
Born in Zarautz, Basque Country to an Algerian father and a Spanish mother, Berchiche started his career in the cantera of Real Sociedad, but left for rivals Athletic Bilbao at the age of 16.

Real Sociedad
In the summer of 2010, aged 20, Berchiche was released by Tottenham, signing a two-year contract with Real Unión in the Segunda División B. On 29 June 2012, after two full campaigns, he returned to Real Sociedad, who immediately loaned him to another team in the third tier, neighbouring SD Eibar.

On 7 July 2017, Berchiche signed a four-year contract with Paris Saint-Germain FC. He made his Ligue 1 debut on 8 September, playing the full 90 minutes in the 5–1 away win against FC Metz. His first goal in the competition arrived on 20 December, in a 3–1 home success over Stade Malherbe Caen.

Athletic Bilbao
On 2 July 2018, PSG announced they had agreed a deal with Athletic Bilbao for the permanent transfer of Berchiche (an initial fee of €19 million, with a further €6 million in possible add-ons). The contract was announced as running through 2022, with a release clause of €100 million.