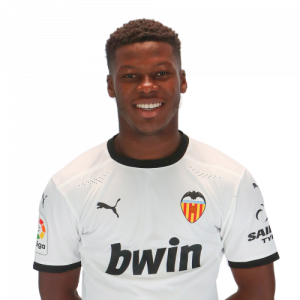 Mainly a right winger, he can also play as a central midfielder. He is a former youth international for England.

Valencia
In the summer of 2019, Musah joined Valencia CF and was assigned to the reserves in Segunda División B. He made his debut with the B-team at the age of 16 on September 15, 2019, starting in a 0–0 home draw against CF La Nucía. He scored his first senior goal on March 1, 2020, netting his team’s only goal in a 1–2 loss at Gimnàstic de Tarragona.

After the arrival of new manager Javi Gracia in Valencia’s first team, Musah spent the 2020 pre-season with the main squad. At age 17 years and eight months, he made his first team—and La Liga—debut on September 13 of that year, starting in a 4–2 home win against Levante UD. In doing so, he became the first Englishman and American to debut for the club.

On November 1, 2020, aged 17 years and 338 days, Musah scored a goal in a 2–2 draw against Getafe CF, becoming the youngest non-Spanish player to score for Valencia, breaking the previous record held by Lee Kang-in, aged 18 years and 219 days. In December 2020, he extended his contract with Valencia until 2026.