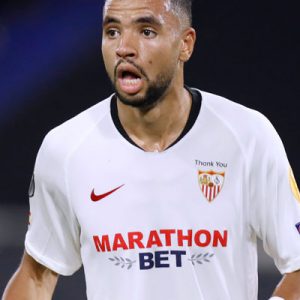 Youssef En-Nesyri (born 1 June 1997) is a Moroccan professional footballer who plays as a striker for Spanish La Liga club Sevilla and the Morocco national team.

A full international for Morocco since 2016, En-Nesyri represented the nation at the 2018 FIFA World Cup and two Africa Cup of Nations tournaments.

On 16 January 2020, Sevilla FC signed En-Nesyri from Leganés for a reported €25 million, on a contract lasting to June 2025; the Andalusians had recently sold their strikers Mu’nas Dabbur and Javier Hernández. He debuted two days later in a 2–1 loss at Real Madrid, as a 65th-minute substitute for Munir El Haddadi, and on his first start on 9 February he opened the scoring on a trip to RC Celta de Vigo with the same result.

En-Nesyri made his debut in European competitions on 20 February 2020, in the UEFA Europa League last 32 first leg away to CFR Cluj in Romania. He scored the late equaliser in a 1–1 draw, that put his team through on the away goals rule. On 6 August 2020, he scored a goal in a 2–0 win over Roma in the round of 16.

In January 2021, En-Nesyri scored hat-tricks in home wins over Real Sociedad (3–2) and Cádiz CF (3–0). On 9 March 2021, he scored a brace in a 2–2 away draw against Borussia Dortmund in the second leg of the Champions League round of 16; however, Sevilla were eliminated as they lost 4–5 on aggregate. On 14 March, he scored the winning goal in a 1–0 win over Real Betis in the Seville derby.