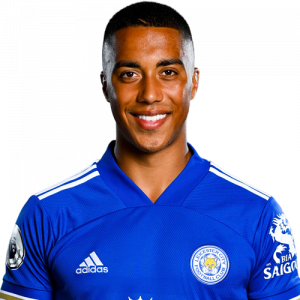 Youri Marion A. Tielemans (born 7 May 1997) is a Belgian professional footballer who plays as a midfielder for Premier League club Leicester City and for the Belgium national team.

Tielemans began his career at Anderlecht, where he made 185 official appearances and scored 35 goals across four seasons. He won the league title twice and in 2017 was chosen as the Belgian Professional Footballer of the Year. He is the youngest Belgian to play in the UEFA Champions League, making his debut in the competition at the age of 16 years and 148 days.

Tielemans represented Belgium at several youth levels and gained his first cap for the full side in November 2016, aged 19. He was part of their squad that came third at the 2018 FIFA World Cup.

Tielemans is a youth product of Anderlecht and signed his first professional contract with the club at the age of 16.

On 21 July 2013, he was included in the senior squad for the first time, remaining an unused substitute in the 1–0 win over Genk in the 2013 Belgian Super Cup. A week later, he made his first-team debut in the opening round of the Belgian Pro League season against Lokeren, replacing injured Sacha Kljestan after 25 minutes of a 2–3 home loss. This made him the fourth-youngest player in the league’s history.

On 2 October 2013, he became the youngest Belgian player to play in the UEFA Champions League, starting in a match against Olympiacos at the age of 16 years and 148 days. He played 29 games – of which 21 starts – as Anderlecht won the 2013–14 Belgian Pro League, scoring to open a 3–0 win over Club Brugge at the Constant Vanden Stock Stadium on 6 April 2014, a game in which he also assisted Cyriac. Tielemans won the Belgian Young Player of the Year award in each of his first two seasons.

Tielemans playing for Anderlecht in 2016
Tielemans scored 13 times in 37 Belgian First Division A matches as Anderlecht won the 2016–17 Belgian First Division A. He won the 2017 Ebony Shoe Award for best player of African origin, and was named 2016–17 Belgian Professional Footballer of the Year. He scored 5 goals in 15 2016–17 UEFA Europa League matches, with his club reaching the quarter-finals, and was selected in its Squad of the Season.

On 24 May 2017, Tielemans joined 2016–17 Ligue 1 champions Monaco on a five-year deal for a fee of around €25 million. He made his competitive debut on 29 July in the Trophée des Champions at the Grand Stade de Tanger, playing the full 90 minutes in the 2–1 loss to Paris Saint-Germain and assisting Djibril Sidibé’s opening goal. On 4 August, Tielemans made his Ligue 1 debut in the 3–2 home win over Toulouse, coming on as a substitute for Radamel Falcao in the 87th minute. He made his UEFA club competition debut for Monaco on 13 September in the UEFA Champions League group match away to RB Leipzig, playing the full 90 minutes and registering his first competitive goal for Monaco by equalizing in a 1–1 draw. On 16 September, Tielemans made his first Ligue 1 start and played the entire match in the 3–0 home win over Strasbourg, after having played a total of 56 minutes as a substitute in his first four Ligue 1 matches.

France Football named Tielemans in their lists of the biggest flops of the first half of the season and the season overall.

Tielemans (left) playing for Leicester City in 2019
On 31 January 2019, Tielemans joined Premier League club Leicester City on loan until the end of the season, with Adrien Silva going the other way in a swap deal. On 9 March, Tielemans scored his first goal for the club in a 3–1 win over Fulham.

On 8 July 2019, Tielemans completed a permanent move to Leicester City, on a four-year deal for an estimated fee of £35 million. He scored in a 3–1 home win over Bournemouth on 31 August, but courted controversy with a high challenge on Callum Wilson that escaped punishment even after consultation with the video assistant referee; referees’ chief Mike Riley ruled that this was an incorrect decision and Tielemans should have been sent off.