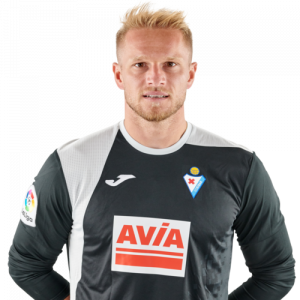 Yoel Rodríguez Oterino (born 28 August 1988), known simply as Yoel, is a Spanish professional footballer who plays for SD Eibar as a goalkeeper.

Celta
Born in Vigo, Pontevedra, Galicia, Yoel was a product of local RC Celta de Vigo’s youth academy. He was promoted to the first team for the 2009–10 season, with the team in the second division. On 10 February 2010, following a string of good performances in that year’s Copa del Rey, he was called up to the Spanish under-21 side training camp by manager Juan Ramón López Caro.

Yoel was first choice in the 2011–12, playing 25 games in a return to La Liga after five years. For the following campaign, however, he was loaned to neighbouring CD Lugo also in the second tier.

Yoel returned to Celta for 2013–14, making his top-flight debut on 19 August in a 2–2 home draw against RCD Espanyol.

Valencia
On 31 July 2014, Yoel was loaned to fellow league club Valencia CF for one year, with the Che having the obligatory option to buy him permanently at the end of this period. He made his competitive debut on 19 October, starting in a 0–3 away loss against Deportivo de La Coruña.

On 19 November 2015, after making no appearances during the season despite the injuries of both Diego Alves and Mathew Ryan, Yoel was loaned to Rayo Vallecano until June to make up for Toño’s serious injury, with a buyout clause. On 20 December, he was in goal at the Santiago Bernabéu Stadium, but his team had to play with nine players for more than 60 minutes and were eventually crushed 10–2 by hosts Real Madrid.

On 30 August 2018, after spending the campaign as a backup to Marko Dmitrović, Yoel renewed his contract until 2021 and was immediately loaned to Real Valladolid for one year.