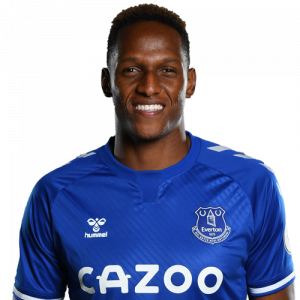 Yerry Fernando Mina González (born 23 September 1994) is a Colombian professional footballer who plays as a centre-back for Premier League club Everton and the Colombia national team. He shares the record for most goals in a single World Cup by a defender, with three goals at the 2018 FIFA World Cup.

On 11 January 2018, FC Barcelona and Palmeiras reached an agreement regarding the transfer of Yerry Mina for the remainder of the current season and five more seasons, until 30 June 2023. This made him the first-ever Colombian to play for the club. The cost of the transfer was €11.8 million, and his release clause was set at €100 million.

On 8 August 2018, Mina signed with Premier League team Everton in a deal worth €30 million.

His first appearance came during a 3–1 home victory against Brighton & Hove Albion, as a last-minute substitute for Gylfi Sigurðsson.

He scored his first goal for Everton in a 5–1 away win against Burnley, a header during the opening two minutes of the match following a cross from Bernard.

He scored his first brace for Everton on 1 February 2020 against Watford at Vicarage Road, scoring them both in stoppage time at the end of the first half in a game that Everton came from 2–0 down to win 2–3.

Mina opened his scoring account for Everton in the 2020–21 season with a bullet header against Brighton in a 4–2 victory at Goodison Park on 3 October 2020.