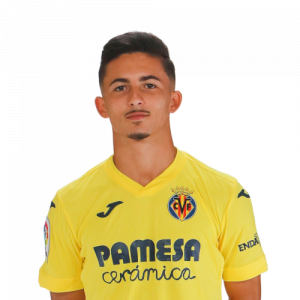 Pino was born in Las Palmas, Canary Islands, and joined UD Las Palmas’ youth setup in 2014, after representing AD Huracán and Barrio Atlántico CF. On 22 June 2017, after refusing an offer from FC Barcelona, he signed for Villarreal CF.

Pino made his senior debut with the C-team on 24 August 2019, coming on as a second-half substitute for Fer Niño and scoring the third of a 3–0 Tercera División away win against Recambios Colón CD. After finishing his first senior season with three goals in 20 appearances, he was promoted to the reserves in Segunda División B.

After spending the pre-season with the first team under Unai Emery, Pino made his professional debut on 22 October 2020, replacing Francis Coquelin in a 5–3 UEFA Europa League win over Sivasspor. He made his La Liga debut three days later, again from the bench in a 0–0 draw at Cádiz CF.

Pino scored his first professional goal on 29 October 2020, netting the equalizer in a 3–1 away success over Qarabağ FK also in the European competition. On 12 November, he renewed his contract with the club until 2024.

On 26 May 2021, he played in the 2021 UEFA Europa League Final, to become the youngest Spanish player to start a major European final, aged 18 years and 218 days, breaking the previous record of Iker Casillas in the 2000 UEFA Champions League Final, aged 19 years and 4 days. He also became the youngest player to win the competition, eclipsing the record set by Robin van Persie in the 2002 UEFA Cup Final.