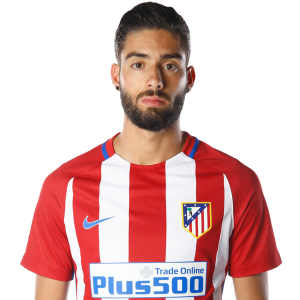 Yannick Ferreira Carrasco (born 4 September 1993) is a Belgian footballer who plays for Spanish club Atlético Madrid and the Belgium national team as a winger and wingback.

He began his career with Monaco, where he scored 20 goals in 105 professional games, winning Ligue 2 in his first season and finishing runner-up in Ligue 1 in the second. In 2015, he joined La Liga side Atlético Madrid for a reported €20 million, scoring in the final as they were runners-up in the UEFA Champions League. After a two-year spell with Dalian Professional in the Chinese Super League, Carrasco returned to Atlético in early 2020 on a loan basis. In September 2020 it was announced that Carrasco would officially transfer to Atletico on a permanent basis and would sign a contract for four years.

Carrasco made his international debut in April 2015. He played at the UEFA European Championship in 2016 and 2020 and was part of their squad that came third at the 2018 FIFA World Cup.

On 10 July 2015, Atlético Madrid announced the signing of Carrasco on a five-year deal for a reported fee of €20 million. On 18 October, he scored his first goal for Atletico in a 2–0 away victory over Real Sociedad.

On 28 May 2016, as a half-time replacement for Augusto Fernández in the 2016 UEFA Champions League Final at the San Siro, Carrasco scored Atlético’s 79th-minute equaliser against Real Madrid; his team lost in a penalty shoot-out. He was the first Belgian to score in a European Cup final.

Dalian Professional
On 26 February 2018, along with teammate Nicolás Gaitán, Carrasco moved to Chinese Super League newcomers Dalian Yifang (later rebranded as Dalian Professional), a club owned by Atléti’s partial owner Dalian Wanda Group. He made his debut on 3 March in an 8–0 loss to Shanghai SIPG, and scored his first goal in his fourth match for the club on 31 March, in a 1–1 away draw with Henan Jianye, ending his club’s season-opening three-game losing streak.

Atlético Madrid return
On 31 January 2020, Carrasco returned to Atlético Madrid on loan until the end of the season. On 8 September 2020, he rejoined the club on a permanent basis, signing a four-year contract. On 21 November 2020, he scored the only goal in a 1–0 victory over Barcelona.