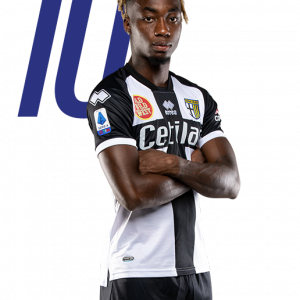 Yann Karamoh (born 8 July 1998) is a French professional footballer who plays as a forward for Seria A side Parma.

Caen
Born in Abidjan, Karamoh joined Caen in 2011 from Racing Colombes 92. On 7 December 2015, he signed his first professional contract, with a duration of three years.

He made his debut in Ligue 1 on 13 August 2016 in Caen’s 3–2 win against Lorient, replacing Ronny Rodelin in the 77th minute. Six days later, he started and played the full 90 minutes in his club’s second league match of the season, a 0–2 defeat away to Lyon.

Internazionale
On 31 August 2017, Karamoh joined Serie A club Inter Milan on a two-year loan deal with the obligation to purchase. He made his Serie A debut 24 September 2017 in 1–0 win over Genoa replacing Borja Valero in the 72nd minute. On 11 February 2018, he started in his first league match and scored the winning goal to give Inter a 2–1 win against Bologna.

Loan to Bordeaux
On 31 August 2018, Karamoh returned to France moving to Bordeaux for a season-year loan.

Parma
On 17 July 2019, Karamoh joined Parma on loan for one year with an obligation to make deal permanent.