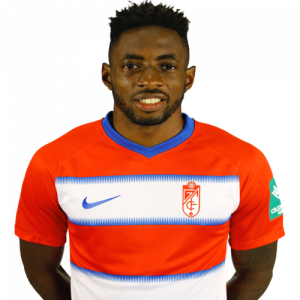 Born in Yaoundé, Eteki signed for Sevilla FC’s youth setup in December 2012, from CD Leganés. He made his senior debut for the reserves on 22 February 2015, coming on as a late substitute in a 2–0 Segunda División B home win against FC Cartagena.

On 11 December 2015, Eteki renewed his contract until 2018. He made his professional debut on 21 August of the following year, starting in a 3–3 Segunda División home draw against Girona FC.

After being a regular starter during the first half of the campaign, Eteki extended his deal until 2019 on 20 January 2017. He scored his first professional goal on 16 April, netting the first in a 6–2 home routing of Real Valladolid.

On 23 August 2018, after suffering relegation, Eteki signed a two-year deal with fellow second division side UD Almería. He became a regular starter in Fran Fernández’s side, contributing with 31 appearances during the campaign.

On 17 July 2019, Eteki returned to Sevilla after the club activated his €500,000 buy-back clause. The following day, he agreed to a three-year deal with Granada CF, newly promoted to La Liga.