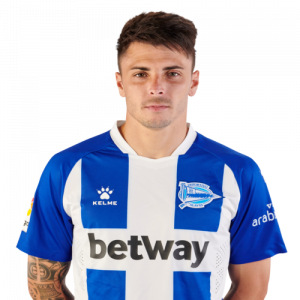 Joaquín ‘Ximo’ Navarro Jiménez (born 23 January 1990) is a Spanish professional footballer who plays for Deportivo Alavés as a right back.

Born in Guadahortuna, Province of Granada, Andalusia, Navarro graduated from local RCD Mallorca’s youth system in 2009. He made his senior debut with the reserve team in Segunda División B, starting in all games but one over the course of two seasons and being relegated in his second.

In summer 2011, Navarro was loaned to Recreativo de Huelva of the Segunda División. He made his official debut on 27 August, in a 0–1 away loss against Deportivo de La Coruña. In January 2012, in the same situation, he signed on loan with another second-level club, Córdoba CF.

Navarro returned to the Balearic Islands for 2012–13. He made his La Liga debut on 18 August 2012, starting in a 2–1 home win over RCD Espanyol, and contributed 16 league appearances as the campaign ended in relegation.

Navarro was an undisputed starter in the following season with Mallorca, who narrowly avoided another drop. He returned to the top flight on 12 June 2014, joining UD Almería on a three-year deal.