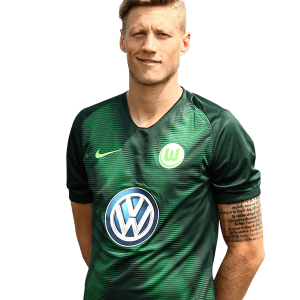 Wout Weghorst (born 7 August 1992) is a Dutch professional footballer who plays as a striker for Bundesliga club VfL Wolfsburg and the Netherlands national team.

Early career
Born in Borne, Overijssel, Weghorst started his career with local clubs RKSV NEO and DETO Twenterand, before evoking interest from Eredivisie team Willem II. Despite having the opportunity to make his way into the first team, he never broke through and therefore signed for Eerste Divisie club FC Emmen. He made his debut on 10 August 2012 in a match against Dordrecht, a match which ended 1–1. Weghorst would go on the score his first goal in professional football a month later, in the derby against Veendam, a match that ended in a 2–1 win for Emmen. He managed to play in 28 matches in his debut season, scoring 8 goals. After his spell with Emmen, Weghorst signed a contract with Eredivisie club Heracles Almelo on a free transfer.

On 9 August, Weghorst made his Eredivisie debut for Heracles Almelo, in a 0–3 home loss against AZ in the Polman Stadion. He was a regular starter in his two years in Almelo. In the first season the club battled relegation from the Eredivisie, but his second season was more successful with Heracles ending in the sixth spot and, through the subsequent play-offs, the club qualified for the Europa League qualifying round – the first time in Heracles Almelo history that the club qualified for an international competition.

AZ
After the successful season with Heracles, Weghorst signed a four-year contract with AZ in July 2016, with the option for an extra year. On 24 November, 2016 he scored his first European goal which proved to be the winning goal in a 0–1 win in a UEFA Europa League group match against Irish outfit Dundalk.

He was appointed the season as vice-captain to Ron Vlaar. Weghorst started the 2017–18 season with good form, displayed by 7 goals in his first 13 starts. He continued that form and after scoring 20 goals in 29 appearances in all competitions, he earned his first full international call-up in Ronald Koeman’s first Dutch squad in March 2018.

He finished the season joint third top scorer in the Erevisie with 18 goals with Steven Berghuis, both behind top scorer Alireza Jahanbakhsh (with 21) and runner up Bjørn Johnsen (with 19). Weghorst also had 6 assists.

VfL Wolfsburg
On 26 June 2018, Weghorst signed a four-year contract with Bundesliga side VfL Wolfsburg. On 16 March 2019, he scored his first hat-trick for Wolfsburg, and first by any player for the club since Mario Gómez in April 2017, in a 5–2 league win over Fortuna Düsseldorf. He finished his first season in Germany with 17 goals, ranking joint-third in the Bundesliga goalscoring charts for the 2018–19 campaign.

In the 2019–20 season, Weghorst produced another impressive goal return: netting 16 times in the league as Wolfsburg finished 6th.

Weghorst scored twice in the 2020–21 Europa League qualifying rounds, but Wolfsburg ultimately failed to qualify for the group stage, losing to Greek side AEK Athens in the playoff round.