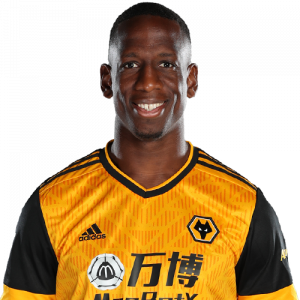 On 8 July 2017, Boly joined EFL Championship club Wolverhampton Wanderers on a season-long loan, reuniting him with his former head coach Nuno Espírito Santo. He made his competitive debut for Wolverhampton on the opening day of the 2017–18 season in a 1–0 home win against Middlesbrough, and scored his first goal with them on 31 October to help Wolves win 2–0 away against Norwich City.

After making 37 official appearances and helping them achieve promotion, Boly signed a permanent contract with Wolves. He made his Premier League debut on 11 August 2018, in a 2–2 home draw against Everton. He scored his first goal in the competition two weeks later in a 1–1 home draw to Manchester City, but the goal proved controversial as television replays showed the ball was deflected into the goal by his forearm after glancing off his head.

Boly scored his first ever goal in UEFA European competition in Wolves’s 2019–20 UEFA Europa League Group Stage game against Beşiktaş in Istanbul on 3 October 2019, a game that Wolves won 1–0.

Boly fractured his left fibula in training on 26 October 2019, necessitating surgery to insert a plate and screws on 30 October 2019. Boly returned from this injury in Wolves’s 0–0 draw away to Manchester United on 1 February 2020, although he had been an unused substitute in Wolves’s previous Premier League fixture at home to Liverpool on 23 January 2020.

Boly scored his first goal of the 2020–21 season, and his first Premier League goal since the 2018–19 season, on 16 January 2021 against West Bromwich Albion in the Black Country derby.