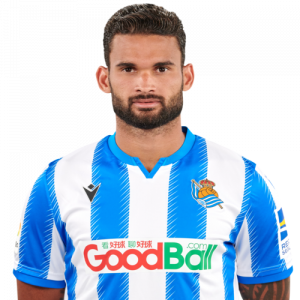 Willian José da Silva (born 23 November 1991), known as Willian José, is a Brazilian professional footballer who plays as a striker for Premier League club Wolverhampton on loan from Real Sociedad.

On 31 July 2016, Willian José signed a five-year deal with fellow league team Real Sociedad. On 21 September, he scored a double in a 4–1 home routing of former club Las Palmas.

Loan to Wolverhampton
On 23 January 2021, he joined Premier League club Wolverhampton for the remainder of the 2020–21 season, with the option to make the deal permanent at its conclusion. José made his first appearance for Wolves as a second-half substitute in a 0–0 draw with Chelsea at Stamford Bridge on 27 January 2021, making a vital headed clearance of a goal-bound shot from Chelsea’s Kai Havertz in the last minute of added time.

José made his first start for Wolves in their next game away to Crystal Palace in the Premier League on 30 January 2021.

José made his debut appearance at Molineux in a Premier League fixture against Arsenal on 2 February 2021 that Wolves won 2–1, thus ensuring Wolves did the league double over Arsenal in 2020–21 for the first time since 1978–79. José won the penalty that Rúben Neves converted for the first of Wolves’s two goals.