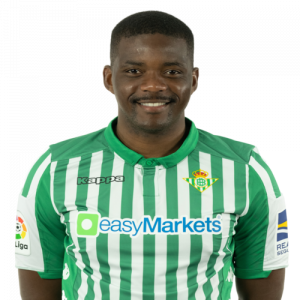 He spent most of his career with Sporting CP since making his debut with the first team at age 18, going on to appear in 193 competitive matches and win the 2015 Taça de Portugal. In 2018, he signed with Betis.

A full international for Portugal since 2013, Carvalho represented the nation at two World Cups and two European Championships, winning the 2016 edition of the latter tournament.

Sporting CP
After moving to Portugal, Carvalho first started playing in the streets and was eventually recruited by Recreios Desportivos de Algueirão. In 2004, he joined União Sport Clube de Mira Sintra, where he was the youngest player in the squad and also their captain. He joined Sporting CP’s youth system at age 13, making his official debut with the first team on 3 April 2011 by playing injury time in a 1–1 away draw against Vitória S.C. in the Primeira Liga, then spent six months on loan to C.D. Fátima in the third division.

Betis
On 13 July 2018, Carvalho joined Real Betis on a five-year contract. The club paid €16 million plus an additional €4 million in variable costs for 75% of the player’s rights, with €10 million more to come later for a further 20% of his rights depending on certain conditions and achievements. He made his La Liga debut on 17 August, playing 65 minutes in a 0–3 home loss against Levante UD.