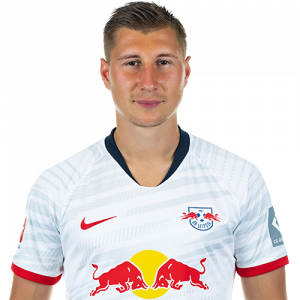 Vilmos Tamás “Willi” Orbán is a Hungarian professional footballer who plays for Bundesliga club RB Leipzig and the Hungary national team as a centre-back.

In May 2015, Orbán joined league rivals RB Leipzig. The move reported to have cost 2.5 million euros transfer fee. He later said: “I switched mainly because of Ralf Rangnick. He can make any player better.”

Ahead of the 2017–18 season, Diego Demme and Orbán were among two candidates to be given a captain role by Manager Ralph Hasenhüttl, succeeding Kaiser. Orbán was officially named captain of RB Leipzig by manager Ralph Hasenhüttl on 11 August 2017. At the start of the 2017–18 season as captain, Orbán scored his first goal of the season, in a 4–1 win over Freiburg on 27 August 2017. He extended his contract until the summer of 2022 on 13 October 2017. Four days later on 17 October 2017, he scored his first UEFA Champions League goal, in a 3–2 win over Porto. However, Orbán was sent–off in the 13th minutes for a professional foul, as Leipzig lost 2–0 against Bayern Munich on 28 October 2017. After serving a one match suspension, he returned to the starting lineup as captain, in a 2–2 draw against Bayer Leverkusen on 18 November 2017. Orbán scored his third goal of the season on 17 December 2017, in a 3–2 loss against Hertha BSC. He continued to stand out for the side as captain, as he helped the side finished sixth place and qualify for the UEFA Europa League. His leadership as the club’s captain earned praise from Manager Ralph Hasenhüttl. Despite missing out eight matches during the 2017–18 season, he went on to make thirty–seven appearances and scoring four times in all competitions.

The 2018–19 season saw the returning management of Ralf Rangnick and made a decision to rotate captaincy given to different players. In the end, it was announced that Orban remained as captain for RB Leipzig. He then helped the side qualify for the UEFA Europa League Group Stage after beating the likes of BK Häcken, Universitatea Craiova and Zorya Luhansk. It wasn’t until on 26 September 2018 when Orban scored his first goal of the season, in a 2–0 win over VfB Stuttgart. Having initially appeared in the substitute bench at the start of the season, Orban regained his first team place in the centre–back position, along with his captaincy. However, he soon lost his first team place and was demoted to the substitute bench, due to strong competition in the centre–back positions. By late–January, Orban regained his first team place in the centre–back position once again, along with his captaincy. He then scored twice for the side, in a 3–0 win over Hannover 96 on 1 February 2019.Orban led the club reach their first DFB-Pokal Final after beating Hamburger SV 3–1. In the final against Bayern Munich, Orbán started as captain and played for 70 minutes before being substituted, as RB Leipzig lost 3–0. At the end of the 2018–19 season, Orbán went on to make thirty–nine appearances and scoring four times in all competitions.