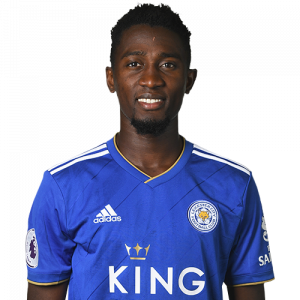 Onyinye Wilfred Ndidi (born 16 December 1996) is a Nigerian professional footballer who plays for Premier League club Leicester City and the Nigeria national team as a defensive midfielder. He is known for his defensive prowess and long range strikes.

Genk
Ndidi made his Belgian Pro League debut with Genk on 31 January 2015 against Charleroi in a 1–0 away defeat. He played the first 74 minutes of the game, before being substituted for Jarne Vrijsen.

During the Belgian League play-off game against Club Brugge, Ndidi scored a long-range goal, which was named the goal of the season in the Belgian league. After receiving an attempted-clearance outside the penalty box, he lofted the ball smoothly over an opposing player before unleashing a ferocious volley into the top right corner. The ball was adjudged to be travelling at over 111 km/h.

Leicester City
On 3 December 2016, Genk agreed a £17 million transfer deal with Leicester City. The deal was confirmed on 5 January 2017.

Ndidi made his debut for the club on 7 January 2017, in a 2–1 win against Everton in the third round of the FA Cup. He made his first Premier League start on 14 January 2017 against Chelsea at home in a 3–0 defeat. In the English FA Cup game against Derby County on 8 February 2017, Ndidi came on in the first half of extra time and scored his first goal for Leicester through a long-range shot. In a 3–1 win over Liverpool on 27 February 2017, Ndidi won 11 of his 14 tackles, a feat bettered only by Chelsea’s N’Golo Kanté who made 14 tackles against the same club in January.

Ndidi was sent off for the first time in his career during Leicester’s 3–0 home defeat to Crystal Palace on 16 December 2017.

In the 2019–20 season,he scored the opener of the season for Leicester against Chelsea.

2020-21 season
On 13 September 2020, Ndidi started at centre-back in Leicester City’s opening game of the 2020–21 Premier League campaign and kept a clean sheet in a 3–0 win away to West Bromwich Albion. Ndidi suffered an adductor injury on 20 September 2020 and was ruled out for 6–12 weeks. He returned to action on 3 December in Leicester’s Europa League loss to Zorya Luhansk.

On 19 January 2021, Ndidi scored his first goal of the season in Leicester City’s Premier League fixture against Chelsea. The match eventually ended with Leicester beating their opponents 2–0.