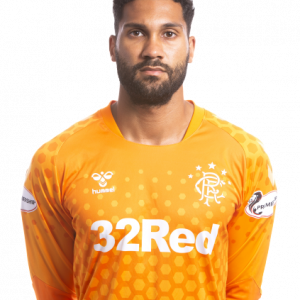 Wesley Andrew Foderingham (born 14 January 1991) is an English professional footballer who plays as a goalkeeper for Premier League club Sheffield United. He is a former England U19 international.

Foderingham was with Fulham and Crystal Palace as a young player, but did not make a league appearance for either club. After playing on loan for a number of non-league clubs, he signed for Swindon Town and made over 160 appearances in the Football League for the Wiltshire club. In July 2015, Foderingham signed a three-year contract with Scottish club Rangers upon being released by Swindon.

Early career
Foderingham was born in Hammersmith, Greater London. He started with Fulham in their youth squad before moving on loan to Bromley. After being released by Fulham, Foderingham signed his first professional contract with Crystal Palace in August 2010, before going on loan with Histon in March 2011.

Foderingham playing for Swindon Town in 2013
There were fears that such a record would prompt other clubs to beat Swindon Town to his signature, but Foderingham had no doubt in his mind which club he wanted to sign for.