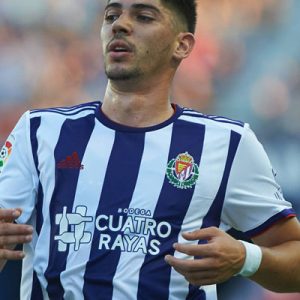 Waldo Rubio Marín (born 17 August 1995) is a Spanish footballer who plays for Real Valladolid as a left winger.

Born in Badajoz, Extremadura, Rubio joined Recreativo de Huelva’s youth setup in May 2013, from CP Flecha Negra. On 2 March of the following year he made his senior debut with the reserves, coming on as a second-half substitute in a 0–1 Tercera División home loss against Conil CF.

Rubio made his first team debut on 25 October 2015, playing the last 27 minutes in a 1–1 home draw against FC Cartagena for the Segunda División B championship. He quickly established himself in the main squad, and scored his first goal the following 28 February in a 2–2 home draw against Real Jaén.

On 11 July 2017, free agent Rubio signed for Córdoba CF and was immediately assigned to the B-team also in the third division. He made his professional debut on 14 January of the following year, replacing Miguel Loureiro in a 0–2 away loss against Cádiz CF for the Segunda División championship.

On 27 July 2018 Rubio moved to another reserve team, Real Valladolid B still in the third division. The following 12 March, he extended his contract until 2022, and late in the month, he replaced injured Pablo Hervías in the main squad.

Rubio made his La Liga debut on 4 April 2019, starting in a 0–1 loss at CD Leganés. He scored his first goal in the category on 5 May, netting the game’s only in a home success over Athletic Bilbao.