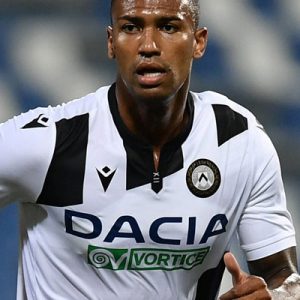 Walace Souza Silva (born 4 April 1995), or simply Walace, is a professional footballer who plays as a defensive midfielder for Udinese.

Grêmio
Born in Salvador, Bahia, Walace started his youth career with the academy of amateur Simões Filho Futebol Clube. While playing in a cup, he caught the eye of a scout of Avaí Futebol Clube and subsequently joined the club in the next year. However, he was soon loaned to the under-23 team of Esporte Clube Bahia in the same year. In 2013, Walace joined the under-18 team of Grêmio.

Walace was promoted to the senior squad of the club in 2014 by manager Enderson Moreira. On 27 April, he made his first team debut against Atlético Mineiro. In August, he made his first start for the club in a 2–0 defeat against Sport Club Internacional, where he was assigned to mark Andrés D’Alessandro. At the end of the season, media reports suggested that Italian club SSC Napoli, Portuguese clubs FC Porto and S.L. Benfica expressed their interest to sign him.

After the appointment of Roger Machado as the club’s manager in 2015, Walace became an undisputed starter for the club. In June, Grêmio rejected an offer from Swiss club FC Basel to secure his services. On 5 October, his contract was extended till 2018. In July 2016, he scored his first league goal in a 2–1 victory over Figueirense Futebol Clube.

Hamburger SV
On 31 January 2017, Walace moved to German club Hamburger SV, signing a contract until 2021. Eleven days later, he scored his first goal in a 3–0 victory against RB Leipzig.

Hannover 96
In June 2018, Walace joined league rivals Hannover 96 on a four-year contract until 2022. The transfer fee paid to Hamburger SV was estimated at €6 million with 10% of the fee going to former club Grêmio.