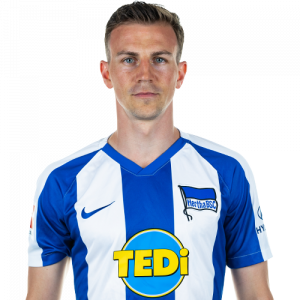 Vladimír Darida (born 8 August 1990) is a Czech footballer who plays as a central midfielder for German club Hertha BSC and the Czech Republic national team.

Born in Plzeň, Darida came through at Viktoria Plzeň, also spending time on loan at FK Baník Sokolov in 2011. He joined Freiburg in 2013.

On 2 November 2014, he scored a penalty for the only goal of the game away to 1. FC Köln to give the club their first win in their 10th game of the season, moving them out of the direct relegation places.

Darida signed for Hertha BSC from relegated Freiburg ahead of the 2015–16 season for an undisclosed fee. He was handed the number 6 shirt. He made an immediate impact for Hertha BSC scoring on his debut in the DFB-Pokal first-round game against Arminia Bielefeld in a 2–0 win. He got his first assist of the season through setting up Salomon Kalou in a 3–1 defeat to Borussia Dortmund. On 27 September he got his first league goal of the season scoring the equaliser in a 1–1 draw away to Frankfurt.

On 28 May 2012, it was announced that Darida would be included in the Czech squad for the Euro 2012 tournament. He replaced injured defender Daniel Pudil. In the quarter-final match against Portugal (Euro 2012), he earned his second cap, his first in an official tournament, starting in place of the injured Tomáš Rosický. He was substituted after 61 minutes for Jan Rezek and the Czech Republic lost 1–0.