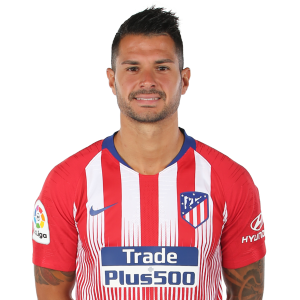 Víctor Machín Pérez (born 2 November 1989), known as Vitolo, is a footballer who plays for Atlético Madrid as a left winger.

He began his career with Las Palmas before joining Sevilla in 2013, where he won the Europa League three times. He signed with Atlético Madrid in 2017, conquering the same competition in his first season and adding the subsequent Super Cup.

Atlético Madrid
On 12 July 2017, Vitolo signed for Atlético Madrid on a five-year deal. However, due to the club’s transfer ban which did not allow it to register any new players, he was sent on loan to Las Palmas until December.

Vitolo made his competitive debut for Atlético on 3 January 2018, coming on as a 59th-minute substitute for Yannick Carrasco in the 4–0 away win over Lleida Esportiu in the Copa del Rey. He scored his first goal in the second leg, a 3–0 victory.