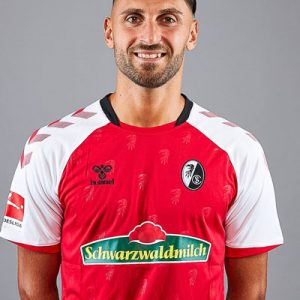 Vincenzo Grifo (born 7 April 1993) is a professional footballer who plays as a winger or midfielder for SC Freiburg and the Italy national team. Born in Germany to Italian parents, Grifo has represented Italy at senior level since 2018.

1899 Hoffenheim
In July 2012, he joined Hoffenheim on a free transfer, signing a two-year contract with the club. After initially playing for the reserve side in the Regionalliga Südwest, he was soon promoted to the Hoffenheim senior squad, and made his debut with the club in the Bundesliga on 19 October 2012, in a 3–2 home win over Greuther Fürth, coming on as a substitute for Takashi Usami. His performances earned him a two-year contract extension, and saw him make a total of 12 substitute appearances throughout the 2012–13 season, as well as 13 appearances and 5 goals in the Regionalliga. In the summer of 2013, he was officially promoted to the first squad, and was given the number 32 shirt. He spent the next seasons on loan with Dynamo Dresden and FSV Frankfurt; with Frankfurt, he registered 7 goals and 10 assists in 35 appearances throughout the 2014–15 season.

Freiburg
His performances led SC Freiburg to purchase him for €1.5 million in July 2015; Grifo played a key role in helping the club to win the 2. Bundesliga title and obtain promotion to the Bundesliga, registering 14 goals and 15 assists in 31 league appearances throughout the 2015–16 season.

In the opening six matches of the 2016–17 season, Grifo registered one goal and four assists in the Bundesliga, as well as three goals in two appearances in the DFB-Pokal.He finished the season with 6 goals and 12 assists in 30 league matches.

In his time at Freiburg he scored 20 goals and made 26 assists in 61 league appearances.

Return to SC Freiburg
On 2 September 2019, Grifo returned to Freiburg permanently once again, having spent the second half of the 2018–19 season on loan at the club.