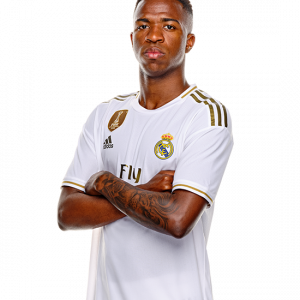 Born in the São Gonçalo, Vinícius began his professional career at Flamengo, where he made his senior debut in 2017, at age 16. A few weeks later, Vinícius was the subject of a transfer to La Liga club Real Madrid, for whom he signed for in a national record for an U-18 player, R$191 million (€45 million) deal, which was made effective after his 18th birthday.

On 23 May 2017, Spanish club Real Madrid signed a contract to acquire Vinícius, effective after his 18th birthday on 12 July 2018 (as age 18 is the minimum age for international transfer). He transferred for a reported fee of €46 million, which was at the time, the second most expensive sale of a player in the history of Brazilian football (behind only Neymar), the largest amount received by a Brazilian club for a transfer, and the highest amount ever paid by a club for a footballer under the age of 19. He was originally scheduled to return to Brazil on loan in July 2018.

On 20 July 2018, Madrid officially presented Vinícius as a Real Madrid player. He was issued squad number 28. He made his debut on 29 September 2018, coming in as an 87th minute substitute in a goalless draw against Atlético Madrid, becoming the first-ever Madrid senior player to be born in 2000. Vinícius made his first start on 31 October in a 4–0 Copa del Rey away victory against Melilla, contributing with an assist for both Marco Asensio and Álvaro Odriozola in what Marca recognised as a Man of the Match performance. He scored his first goal on 3 November 10 minutes after coming on as a substitute in a 2–0 victory against Real Valladolid. He scored 4 goals between his debut on 29 September 2018 and 7 February 2019. Vinicius joined a Real Madrid team that was going through a transition, as it went through three different managers in his first season. It was under manager Santiago Solari that he seemed to be most impactful. That was until a ruptured knee ligament ended his season immediately.

On 6 April 2021, Vinícius scored two goals in a 3–1 win against Liverpool in the first leg of the 2020–21 UEFA Champions League quarter finals.